The Process of Hearing 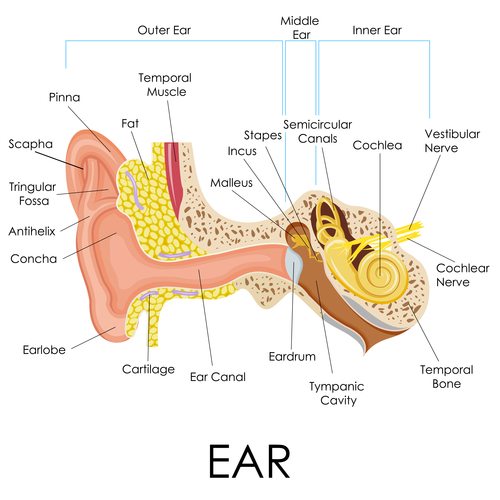 The world is filled with sound. A child’s giggle or your favorite song can delight you. Sirens provide you with an audible warning of impending trouble. The screech of an alarm clock demands that you rise and shine. Speech allows people to communicate, connect, and collaborate with those around them. Sometimes, people hear too much, and a cacophony of noises overwhelms them. On other occasions, the sheer absence of sound can seem unnerving. People spend a lot of time thinking about what they hear, but many take the ability to do so for granted. Have you ever wondered how the process of hearing works?

Understanding the Process of Hearing

How do people hear? How does the human ear transform a sound wave into something heard? While the senses of smell, sight, and taste involve chemical reactions, hearing is completely mechanical. Although people rarely think of hearing as an energetic activity, it actually involves a series of physical movements.

Sound is the result of a vibration. When a bell rings, it causes the surrounding air particles to vibrate, and these vibrations travel through the air as sound waves until they are captured by the pinna, the outer part of the ear. Then, the pinna directs the sound waves into the ear via the ear canal.

Once inside the ear canal, sound waves encounter the tympanic membrane, a thin piece of skin that separates the ear canal from the middle ear. Often called the eardrum, this structure helps transmit sounds into the ear, acting like a diaphragm in a microphone. It also protects your hearing. When you are exposed to lengthy periods of loud, low-pitched noises, the eardrum is pulled tight by nearby muscles, making it more rigid and dampening the noise to a more manageable level. The same reflex kicks in when you speak to prevent your own voice from deafening you.

The smallest bones in the body reside in the middle ear. While the malleus (which is commonly referred to as the hammer), the incus (which is known as the anvil), and the stapes (which is also called the stirrup), are little, they have a big job. Collectively known as the ossicles, this potent trio magnifies the vibrations of the eardrum so that they can continue their journey into the ear. Their combined efforts are so effective that the pressure applied to the cochlear fluid is about 22 times the pressure felt at the eardrum.

In the inner ear, sound enters the cochlea. The cochlea is the most complex structure in the ear, which isn’t surprising since it is where physical vibrations are converted to electrical impulses that the brain can recognize. Here, the medium through which sound travels changes from air to a fluid. The waves travel through the cochlear fluid like ripples on the surface of a puddle. The basilar membrane, which is made of thousands of reed-like fibers of various lengths and stiffnesses, stretches along the length of the cochlea. The structural differences in the fibers allow them to resonate with different frequencies, and the vibrations that make up a sound intensify when they interact with fibers with matching frequencies.

When vibrations find their frequency match among the basilar membrane’s fibers, a burst of energy is released. This energy stirs tiny hair cells on the organ of corti, a tiny structure with an electric purpose. When the organ of corti’s hair cells are moved, electrical impulses are transmitted via the cochlear nerve.

The cochlear nerve is also known as the auditory or the acoustic nerve. It carries the sensory information received from the inner ear to the brain, where it is interpreted as sound.

The process of hearing is amazing. It is also amazingly complex, so there are several places where things can go wrong. Sadly, a variety of factors can result in hearing loss. If you or a loved one is struggling with hearing loss, consider consulting an audiologist. Trained to identify, diagnose, monitor, and treat ear disorders, these health care professionals strive to help their patients better understand the process of hearing.

If you have been experiencing hearing loss or another hearing disorder and you live near Limon, Pueblo, or Colorado Springs, Colorado, contact Apex Audiology. Dr. William F. Herholtz can conduct a simple hearing test, increase your understanding of your hearing loss, and offer solutions for treatment. To get started, please call us at 719-247-9000 or schedule an appointment online. We look forward to hearing from you!