Gilberto Gil Named As New Ambassador For Hear The World 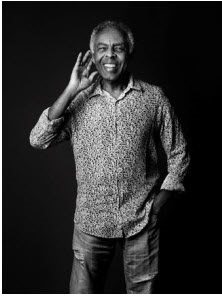 Brazilian musician pledges his support for the non-profit foundation.

Staefa, September 24, 2015 – The Hear the World Foundation is pleased to welcome the support of a new celebrity ambassador: Brazilian superstar Gilberto Gil is now championing the cause of the non-profit foundation, whose vision is to create a world in which every person has the chance to enjoy good hearing. His official ambassador portrait, in which he is photographed with one hand cupped behind his ear, was staged and shot by another famous figure from the music world: Bryan Adams has been supporting the foundation for many years now and, aside from his career as a musician, has long since made a name for himself as a photographer.

Gilberto Gil’s first taste of music came in the early 1940s with the sound of accordion players and troubadours. Later, he fell in love with the increasingly popular bossa nova genre, and at the beginning of the 1960s he joined forces with Caetano Veloso to kick-start the Tropicalismo movement. This not only offered a radical interpretation of the bossa nova style, but also gave it a political dimension, with social grievances and the injustices of society a common theme in Tropicalismo songs.

Gil was exiled to London during Brazil’s military dictatorship, but when he returned to his homeland his rise was unstoppable. Now, with eleven gold and five platinum disks to his name and over four million records sold, Gil is one of South America’s most popular artists. Alongside his musical work, he has also forged a career in politics, serving as Minister of Culture in Luiz Inácio Lula da Silva’s government from 2003 to 2008.

“I’m a musician and hearing is my life,” said Gil, explaining why he has committed his support to Hear the World. Educating and providing care for people with hearing loss is therefore a cause very close to his heart.

By becoming an ambassador, Gilberto Gil is joining the ranks of more than 90 celebrities – including Sting, Kate Moss, and Diana Krall – who are supporting Hear the World and have had their photographs taken in the conscious hearing pose by Bryan Adams. The photograph of Gilberto Gil will be included in the 2016 Hear the World calendar and Gil will continue his support for the cause after that.

About the Hear the World Foundation

By supporting the charitable Hear the World Foundation, Sonova is campaigning for equal opportunities and a better quality of life for people with hearing loss. As a leading manufacturer of hearing care solutions, the company feels socially responsible for contributing towards a world where everyone has the chance to enjoy good hearing. For instance, the Hear the World Foundation supports disadvantaged people with hearing loss around the world and gets involved in prevention and providing information. It focuses particularly on projects for children with hearing loss, to enable them to develop at the appropriate rate for their age. More than 90 famous ambassadors, including celebrities such as Plácido Domingo, Annie Lennox, Sting and Joss Stone, champion the Hear the World Foundation. For further information, go to www.hear-the-world.com. Connect with us at http://www.facebook.com/CanYouHearTheWorld.